Heidi Bryan is a field leader at the forefront of robust public health efforts focused on survivors of suicide attempts in our nation.

An author, advocate, public speaker, trainer and non-profit executive manager, Ms. Bryan is an attempt survivor who says she doesn’t recall a time in her life when she hadn’t thought about suicide. She remembers a time when she was in second grade and wanted to disappear and get away, and “the only way I could get away was to die.” 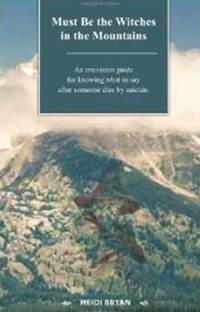