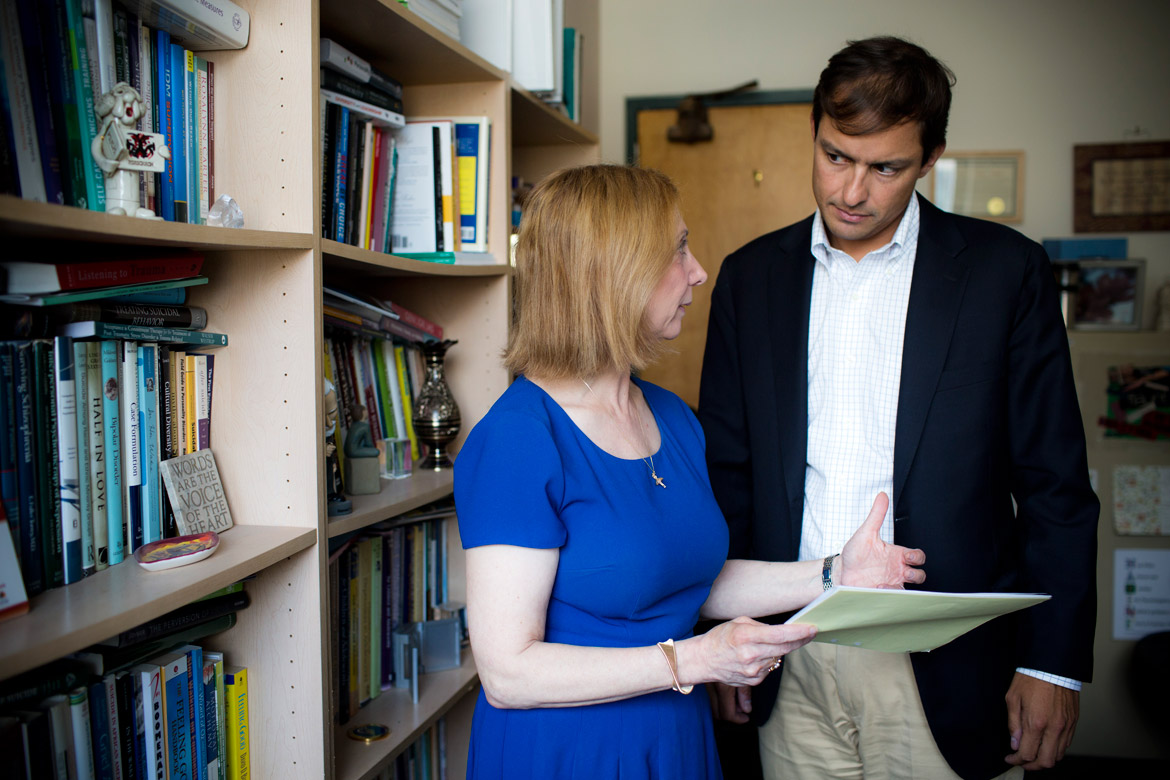 Emory colleagues Drs. Nadine Kaslow and Dorian Lamis collaborated on editing a new compendium of the latest science in the field of suicidality. “Advancing the Science of Suicidal Behavior: Understanding and Intervention” was released in late 2014 from Nova Science Publishers. Photo courtesy Emory Health Sciences Communications.

When Drs. Nadine Kaslow and Dorian Lamis took on the task of editing a 500-page volume on the latest science of suicidal behavior, they knew the 20-month endeavor was significant—yet well warranted.

“While there are a number of very good compendiums on suicide prevention, this one is very science-based, very evidence-based. That was really important to us,” says Dr. Kaslow of the book. “It’s one of the more thorough books on suicidal behavior in a variety of populations—age, gender orientation, race, ethnicity and culture, rural and urban geography, military status and more.”

“Advancing the Science of Suicidal Behavior: Understanding and Intervention” was released in late 2014 from Nova Science Publishers. It features international authorities in suicidology, summarizing the state of the science today from many points of study within the field.

“We considered a variety of different treatment approaches, for the individual and the family. We included postvention, and sought to consider the whole continuum of intervention and prevention strategies within the field today,” Dr. Kaslow notes.

Dr. Lamis adds that new content in the book may provoke further discussion and research in the field, including a chapter on epigenetics of suicidal behavior, specifically, the role of early life experiences in shaping the development of key stress response systems and one’s susceptibility to suicidal behaviors. A recent and promising area of research, epigenetics may play a role in predicting response to treatment, thereby improving care of patients at risk for suicide.

“Epigenetics is about identifying biomarkers and why people are more vulnerable to suicide through genetics,” he notes. “For instance, does child abuse or early trauma affect gene expression to make people more vulnerable?”

Another book chapter that Dr. Lamis calls “provocative and groundbreaking” challenges the interpersonal theory of suicide, first described by Thomas Joiner, Ph.D. in 2005. In this chapter, the author, Kimberly A. Van Orden, describes the hypotheses of the theory, gives an update on its status, and discusses the theory’s utility for suicide prevention science.

The book’s takeaway for practitioners who see people at risk for suicide?

“Suicidal behavior is not monolithic. You must consider the demographic background of the person and more,” says Dr. Kaslow. “There are multiple models for understanding suicidal behavior, and we present these with the goal of being really helpful in guiding clinicians.”

It is essential to consider biology and genetics, psychosocial factors, and interpersonal and family systems variables when determining one’s potential for suicide. Add to that the public health perspective and systems of care within communities. “You can’t look too narrowly at it,” Dr. Kaslow notes.

The bottom line, adds Dr. Kaslow? “You really can’t do this by yourself,” she says to clinicians or any practitioners who engage with at-risk people. “It takes teams, it takes communities.”