Moving from planning to action in suicide prevention is no easy task. Yet Mike Hogan would like to pick up the pace.

“We’re stuck. It’s like we’re in a car and we’re going 35 miles per hour,” says Dr. Hogan, director, Ohio Department of Mental Health Services. “We can’t get there until we accelerate. And we can’t accelerate without developing the leadership resources that our local coalitions need.” 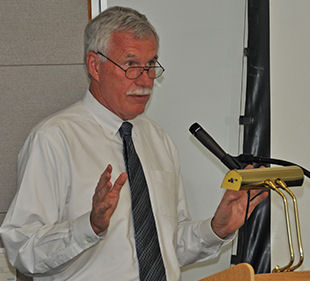 The 2003 final report of this exhaustive 2-year effort emphasized the need to transform the nation’s mental health system, starting with suicide prevention and decreasing stigma around mental illness.

“We need a robust point of leadership within each state to advance the agenda, marshal coalitions and galvanize attention from all sectors that need to be involved. It can’t be someone buried in state bureaucracy,” says Dr. Hogan. “Nor can we have a single strategy aimed at kids, the elderly or men and depression. Screening kids is great. But it’s a little blip on the overall effort. We have to have a relatively broad long-term approach.”

Tipping his hat to federal support from the executive, legislative and judicial branches, Dr. Hogan also sees significant challenges ahead.

“The good news at the federal level started with Dr. Satcher’s leadership. That put the issue on the radar screen, and now with Senator (Gordon) Smith’s lead,” he notes, referring to the Garret Lee Smith Memorial Act, named in memory of the 21-year-old son of Sen. Smith (R-Ore.) who took his life in 2003, and signed into law by President Bush in October 2004.

“Now the national priority has been firmly established. What is problematic is that the efforts to carry out this priority are limited and relatively unfocused.” Dr. Hogan’s home state of Ohio is a good case in point. “We’ve got a more comprehensive effort in Ohio than many other states,” notes Dr. Hogan, adding that suicide coalitions are in place in 39 of 88 counties. “We have terrific local coalitions. And we have a very dedicated state-level team. But this won’t advance the issue fast enough. Looking overall at the state of Ohio, my conclusion is that the effort is under-powered and doesn’t have enough prominence.”

What’s needed to pick up the pace of suicide prevention is, in Dr. Hogan’s opinion, more substance and visibility outside of government but yet connected to government.

How? Through a new entity with responsibility, resources and authority.

“To grab attention and move forward, we’re working to create a prominent and visible leadership entity that we are calling the Ohio Suicide Prevention Foundation,” says Dr. Hogan. “It might be housed in a nonprofit, university or hospital. But it would have enough resources to accelerate our efforts and provide public leadership.”

“We need broader and better informed consensus on what a comprehensive suicide prevention strategy looks like, with some sense of priorities. We have enough self-analysis and not enough action. We need to take action and to evaluate it.”