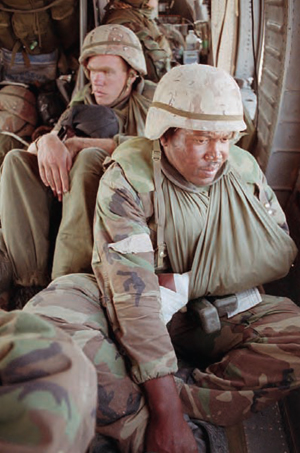 These are among the horrific experiences of war, of day-to-day life in a combat zone. They can leave their mark on soldiers, not only in physical but also mental scars that may last a lifetime.

Those scars combined with other factors can create a potential for suicide. Recent news reports about the rising incidence of suicide in the U.S. military – among both active-duty enlisted and reservists as well as recently discharged personnel – highlight the precarious mental condition of some soldiers returning from battle.

More than 130,000 U.S. troops began coming home from Iraq and Afghanistan in January 2004. Nearly that many more will rotate into those countries to replace departing troops in what has become the largest mobilization of American military personnel in more than a decade.

Not since Vietnam has exposure to combat violence been as great for U.S. troops as what they may be encountering in Iraq and Afghanistan. Returning troops bring with them both physical and emotional battle wounds.

So chances are good that crisis interventionists along with civilian psychologists, social workers, physicians, law enforcement, clergy and others will begin to encounter returning soldiers and newly “minted” veterans in coming months.

Some of them may be suicidal, such as Lt. Brandon Ratliff, a six-times decorated Army reservist. He took his life in March after unsuccessfully fighting Columbus city officials for an expected promotion when he returned from service in Afghanistan. Ratliff was executive officer of a reserve surgical team on the front lines; his duties included retrieving wounded soldiers from the battlefield.

“I didn’t think that I’d have to fight over there and come back and fight these guys,” Ratliff is quoted as saying in a March 19, 2004 story by the Associated Press. A coworker and friend attributes Ratliff’s anger about his work to depression he suffered after his return. “He had seen children die,” she said as reported by AP.

Suicidal veterans could also include those such as Green Beret William Howell, who killed himself March 14 outside his home in Monument, Colo., after city police officers ordered him to drop his weapon. Howell, 36, had been following his wife around the front yard with a handgun. He left three children.

Or such as Jeremy Shannon Seely, who survived three years in the Army – including one year in Iraq – but lived just days after returning home. Seely was found dead January 17 of an apparent suicide at a motel in Clarksville, Tenn., near the 101st Airborne Division’s base at Fort Campbell, Ky.