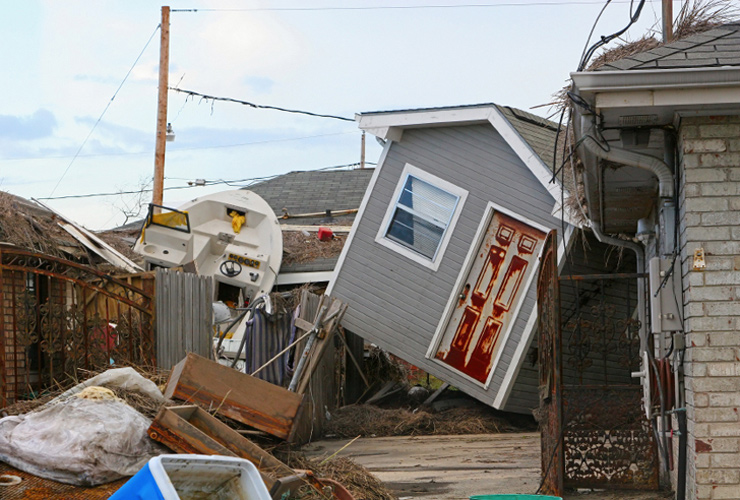 A driveway and back yard are littered with debris after Hurricane Katrina. Sheds and boats piled on top of fences and house roofs.

The emotional effects of seeing homes, neighborhoods and lives destroyed continue to plague residents of the Gulf Coast more than a year after the devastation of Hurricane Katrina.

At the tip of this emotional iceberg? Suicides, which have tripled in Orleans Parish, according to a November 9, 2006, report by The Associated Press.Additionally, involuntary psychiatric commitments have risen, and increased calls to law enforcement for domestic violence, drunkenness and fights continue to strain local service providers.

Many of these providers themselves—police officers, social workers, community mental health clinicians and others—are susceptible to their own personal fatigue and fallout from the storm. This crisis in mental health care has also strained the city’s few operating hospitals, reduced to just two of 11 hospitals pre-Katrina.

One of them, Jefferson Parish Medical Center, typically had seen, on average, one patient in a psychiatric crisis daily before the storm; today staff sees about 12 people a day, emergency room physician Dr. Richard Manthey reported to AP on November 8, 2006.

The psychological effects of Hurricane Katrina were spotlighted at the 22nd Annual Rosalynn Carter Symposium on Mental Health Policy, November 8 and 9, 2006, in Atlanta. Rescue workers and survivors in attendance described a bleak overview of the long-term psychological fallout from Katrina.

Mental health effects from the unprecedented storm that claimed thousands of lives was twofold: it triggered anxiety and depressive disorders in people—including rescue workers—who may have never faced a mental health issue. The storm also crippled mental health service delivery to those with chronic pre-existing mental illnesses.

Findings shared at the Carter symposium are underscored in a federally funded study released Aug. 28, 2006, in the Bulletin of the World Health Organization, which shows the prevalence of mental disorders roughly doubled in the months after the storm.

Children can be particularly impacted, according to Jim Yancey, executive director of the Jackson County Community Services Coalition in Jackson, Mississippi. Difficulties concentrating on schoolwork, residing in FEMA trailers, symptoms of depression such as irritability, trouble sleeping and behavioral and mood swings are some of what Yancey has observed. As for adults, they’re experiencing domestic and marital problems—and if they seek counseling, can face significant delays due to backlogs from insufficient number of counseling services providers.

“The impact of Hurricane Katrina on victims was unprecedented for our nation,” says Dr. Thomas Bornemann, director of The Carter Center Mental Health Program. “People suffered multiple traumas not only from injury and loss of possessions, but from the perception that agencies and authorities were unable or unwilling to help them.” Bornemann adds that gathering officials and experts at The Carter Center will help define effective practices and policies to address these needs in the future by improving disaster planning, preparedness and response as they relate to mental health.

What insights and experiences do you have about suicide a decade after Hurricane Katrina? This blog is a forum for discussion, and your stories, comments and questions are valued and treated with respect by Empathos. We prefer if you post your thoughts and questions to @empathos_tweets.