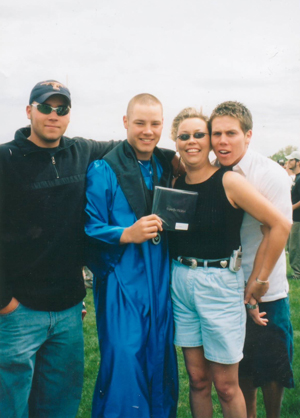 BJ Ayers of Cheyenne, Wyo. lost two of her three sons to suicide—Brett (second from left) in 2005, and Beau (left) in 2009. Son Blair (right) and BJ now work in suicide prevention advocacy.

Losing two sons to suicide was something that BJ Ayers never thought would be part of her life. Her youngest, Brett, died in 2005. Then in 2009 eldest son Beau died by suicide.

“It must have been a couple days after Beau died. I had a house full of people, the funeral hadn’t happened yet. And there I was sitting by myself on my patio. It was morning, I remember, it was hot, in the 80s because it was August in Cheyenne. I remember the sun on my face and thinking, how am I going to do this again? How am I going to go through this another time? There’s got to be grace for my two sons, for what they had to endure before they took their lives. And I swear I heard a whisper from God, that there was indeed grace for these two brothers. I felt as if I had been prepared my whole life to take on what was next.”

What was next for BJ was to become a change agent—within her community of Cheyenne, Wyo., at the state level and nationally.

BJ walked the path of scores of survivors of suicide loss who came before her. The field of suicide prevention—and suicide as a preventable public health threat—grew out of a groundswell of action to change policy, and led by loss survivors.

In the United States, these include Jerry and Elsie Weyrauch of Marietta, Georgia, whose resolve and steadfastness after losing their daughter to suicide in 1987 led to policy changes that have been profound and long lasting.