But when bullying behaviors are present, they undermine a culture of kindness and acceptance so vital to learning—not to mention a key safety and overall well-being of students, staff and community. 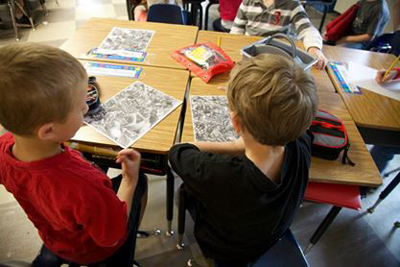 Students in the Northwest R-1 School District, outside St. Louis in Jefferson County.

Making sure students feel safe from intimidation and harassment isn’t just a priority for many Missouri education administrators. It’s a mandate that’s non-negotiable. That’s why districts across Missouri continue to bolster bullying-prevention policies and protocols. This recent focus is due, in part, to federal law requiring all school districts nationwide to have had bullying policies in place by the start of the 2010 academic year.

Yet progressive districts recognize that bullying breeds a climate of disrespect and fear that run counter to the core mission of schools —that is, to help prepare youngsters to rise to their full potential as adults. Among these forward-thinking Missouri school districts? Northwest in Jefferson County.

When Northwest conducted a survey in spring 2006 to gauge bully awareness among students, school officials were concerned to learn that 11 percent of the district’s students reported they feel unsafe at school.