Suicide and the holidays 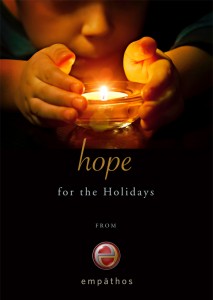 We’ve heard the myth for years and years: the period of time between Thanksgiving and New Years is the most perilous for people struggling with suicidality. It’s such an ingrained “fact” that we don’t even question it anymore.

The holidays can be difficult for people with depression, people who are alone and those who feel the sharp sting of unmet expectations at the end of the year. But in fact, the CDC reports that the number of suicides is the lowest in November and December.

The highest rates occur in the spring, and theories vary on why that is. Perhaps at-risk people come through the holidays OK and then grow despondent when the changing weather and new vigor of spring doesn’t touch them. Perhaps people just have more energy to contemplate, plan and complete suicide in the longer days of spring.

The media are beginning to catch on that the holiday suicide wave is a myth. An analysis by the Annenberg Public Policy Center showed that more news stories debunked the holiday-suicide myth last year than supported it.

Of course, we know suicides happen year-round, that suicide is the 10th-leading cause of death in the United States and that roughly 40,000 people end their lives every year.

The bottom line is that every day of the year is dangerous for people who contemplate ending their lives. An average of 105 people commit suicide every single day. For those people and the people who love them, it makes no difference what time of year it is. The only thing that matters is finding effective help to ease the pain and end the suicidal thoughts.

For that, we know that evidence-based intervention is the very best way to cut through the ideation that leads people to consider suicide a good solution. If you know someone who is struggling – with depression, alcoholism, loneliness, illness or anything that inhibits his quality of life – reach out. It doesn’t matter if your message is “Merry Christmas” or “Happy Labor Day;” people at risk of suicide need to know that while their pain is real, but it doesn’t have to be permanent.