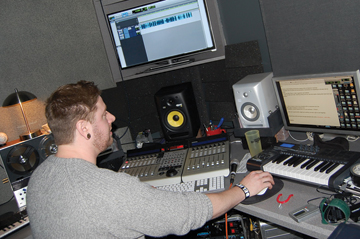 Learned the hard way: Self-reliance is a failsafe way to achieve a goal

Zak will never forget Christmas morning when he was 11 years old. That was the year his dad and grandpa surprised him with his first drum set. Prior to that Zak had resorted to banging out a beat on anything he could get his hands on, among them a wooden bowl with a mousepad glued to it—one of his first music-making creations.

Sound has always been central in Zak’s life, his dad playing guitar when he was a child—and Zak picking up his dad’s instruments to mess around on. Zak had a short stint playing baritone in high school band, but admits he “never fit into the shape of sitting in front of a music stand and playing with a group.” Instead he carved his own path, attending the Minneapolis Institute of Production and Recording for a time, where he studied audio/music production and studio engineering.

Anxious to pick up the pace on his career, Zak returned to his roots in Sheboygan County to pursue his work in audio engineering and sound design. Today he provides original, quality sound for recording, mixing, composing, post-production and voiceovers. Zak’s unique hybrid approach and proven expertise includes managing audio projects from start to wrap, including conceptualization, sound, music, editing and all other post-production—all to help achieve desired outcomes.

He has created sound and music composition for independent and commercial clients including award-winning brands in the education, CPG and service sectors, as well as for independent filmmakers and musicians.