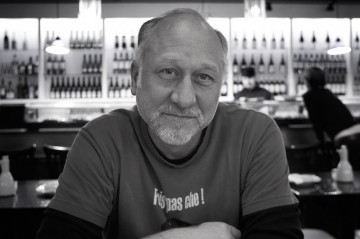 At Empathos: Puts artistic talent together with the science of composition and lighting to illustrate the work of suicide prevention

Career: 20 years in commercial photography and videography, following a first career in the bar/restaurant industry. Currently one-half of mp2 Productions

Sideline:  Food made with love, both cooking and eating. Also, good red wine.

Learned the hard way:  Give the client what he wants even when you know there’s a better way

At the tail end of his bar and restaurant career, Michael was a ski bum and bartender in Vail, Colorado. He liked taking pictures, so naturally he chucked his chosen profession and decided to become a travel photographer instead. After saving money for one more season, he bought a one-way ticket to Cairo. He took pictures until he ran out of money and then took a job tending bar in Luxemburg, where he continued to take pictures. What he learned was that it’s not enough to know how to frame, light and shoot a pretty picture, you have to know how to GET the shot no matter what. If Biblical floods come, you’ve got to walk away with the shot. That idea sent him to photography school.

What is Michael’s biggest takeaway from three decades of travel to 38 countries? The world doesn’t have enough good bartenders.