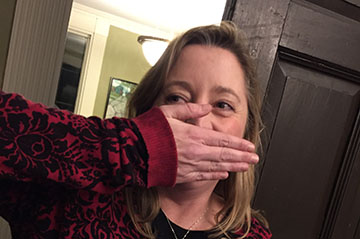 At Empathos: Shares the good work Empathos is doing with the world

Education: Bachelor of Arts in Journalism

As the only sophomore in her high school journalism class, Janet figured she was destined for life in the newsroom when she creamed the juniors and seniors with her work. And for close to 25 years, she was right. During her journalism career she covered everything but sports — including one execution, several high-stakes criminal trials, way too many family reactions to fatal tragedies and countless snoozy meetings. Then one day, journalism was done with her, and she thought long and hard about what to do next.

Up until then, Janet had rolled her eyes at the thought that floated through her mind thousands of times — “I want to be a freelance writer” — because it was impractical. Ridiculous! With a son to raise and a home to run, there was no room for such whimsy. Until suddenly, there was nothing but room for whimsy, so she jumped on board. In addition to handling social media, ghostwriting, online support, public relations and whatever other tasks clients require, she’s also feeding another long-suppressed urge toward whimsy: fiction. In November 2015 she completed her first National Novel Writing Month novel, cranking out 50,000 words about murderous grannies in 30 days.

At Empathos, she is using her talent with words — and her skill at boiling down complex ideas into easy-to-understand bites of information — to get the company’s good work out into the world. Suicide touches everyone in some way, and Janet is doing her part in hopes it will become an obsolete idea that people in her future grandchildren’s world can’t comprehend.