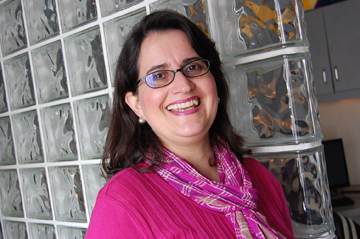 Sideline: Immersing herself in poetry, plus her hubby and four chiquitos

Learned the hard way: If you want to go to Geneva but take the train to Genoa, you’ll end up in the wrong place

Performing street theater in downtown La Paz, Bolivia was Ale’s first public foray into mass communication. She was a teenager then, a German citizen but multi-lingual and raised in Bolivia. Theater gave Ale lots of gifts, among them losing her fear of making a mistake, of saying dumb things or forgetting her lines.

All important things as she migrated into what now is a 20-year career in strategic communications. The power of communicating effectively isn’t lost on her: “I believe everything can change when we communicate. With communications we get better.”

It’s that power and promise that drive Ale’s work and life. People are her focus, and connecting  with them—via a website, social media, a product on a shelf, or especially in person—is her passion. She loves the unfiltered feedback that social media propels, and the one-to-one human contact that carries us all forward.

Ale’s sensitivity to cultural differences, to language, beliefs and social systems, are the cornerstone of her work. Out of this has emerged a focus on fairness and equity for people who are often marginalized by society. “Obviados” as she calls them, “they’re transparent, we look through them. No matter what we do, what we get, what we eat or how we dress, there’s somebody behind the whole thing.”

Acknowledging the Obviados and ensuring they are treated with fairness, dignity and appreciation is central to Ale’s approach—and to her work at Empathos, with its focus on empathy in mitigating risk in suicidal people.